Last weekend, b01lers from Purdue University had their CTF bootcamp designed for beginners from Saturday Oct 4 9AM EDT to Sunday Oct 5 8PM EDT. It was a busy weekend for why not make team, so I was the only one able to participate (and even then, I didn’t have too much time).

As with Down Under CTF, I didn’t end up finishing all the challenges (not even close!) so this will serve as a record of what I’ve tried (and what didn’t work).

935 teams signed up for b01lers bootcamp CTF (513 of which submitted solutions), and a perfect score on the CTF was 6,000 points. There were six categories overall:

I’ll be writing about these in chronological-ish order of how I solved them, by category.

We’ve identified a malicious troll who may be linked to a ransomware-esque virus. They’ve been making posts using the hashtag “#shrive”. For now, just sift through the irrelevant junk and try to find another one of their accounts.

Looking on Twitter for the hashtag #shrive, we see there’s this account that’s been tweeting for the last few days about #shrive and malware … 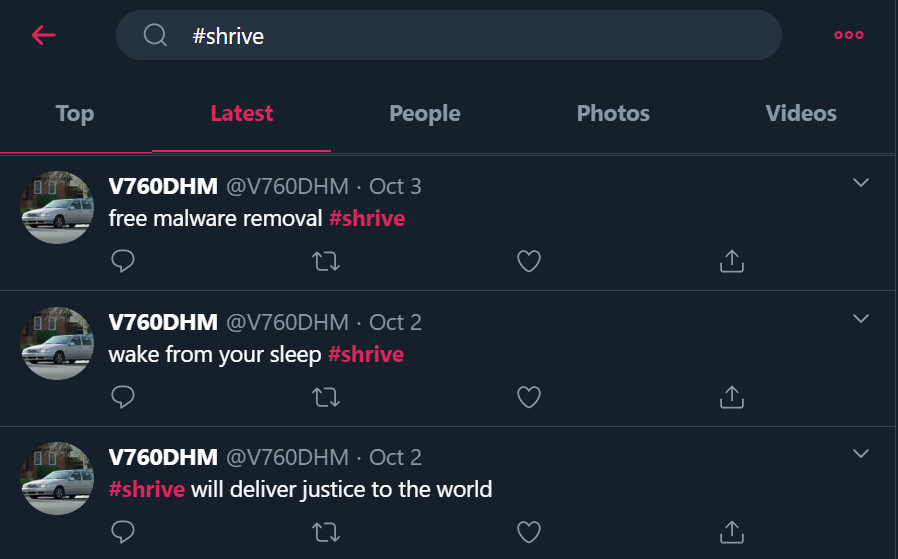 Scrolling through their timeline, we see that on Oct 2 they tweeted “OH SHOOT”, followed by “nothing suspicious here” half an hour later. I tried going on the Wayback Machine to check this profile, but there were no snapshots taken.

Scrolling all the way down to their first tweet, we finally get a link:

Which then takes us to their Imgur account with the same name. Going to the trollface image and clicking “Show bad comments” will then reveal their comment, with one downvote, containing the flag.

A disgruntled ex-employee of Granular is the prime suspect behind recent killings in the nation. We’ve received his manifesto, which included this photo of him. Is there anything here that could help us figure out his location?

Running exiftool on the image provided will give us the information we need.

Needle in a Haystack

Can you find the needle?

The challenge provided us with a link to a ZIP file. Once downloaded and unzipped, there were 400 text files inside (i.e., not ideal for manual searching). I used grep to try and look for which file contained flag{ (and really really hoped it was in plaintext).

Thankfully it was in plaintext - and I got the flag!

The mysterious artist Zima has unveiled his latest piece, and once again, it features his signature shade of blue. I honestly don’t get it. Is he hiding a message in his art somehow?

We were given this image:

Since the challenge mentioned “signature shade of blue”, I figured it had something to do with the RGB colour planes. Using stegsolve, I opened the image and walked through the layers of the image using arrow keys. I then found the flag at the bottom of the rectangle on layer “Green plane 6” (but it is also visible on other layers).

This was one of my favourite areas of the CTF. You were essentially led to a page where you could embark on a text-based adventure, à là “You are in a room with a puzzle. There are three doors leading to your N/S/W”. Granted the flavourtext was much more well-written than that, but you get the gist.

This area focused primarily on math problems. When you provided the correct answer, the correct flag was then printed out. This area was super fun for me not because I actually wanted to solve any of these math problems, but because it really showed me the limits of calculators (even if they called themselves “big number” calculators).

Flag: mini{B1_485a3ae14ebb98e8ccc855b3}
Tools: Linear diophantine equation calculator
Fun fact: This calculator is by someone from UWaterloo!

I used dcode’s modular exponent calculator for this (since it allows you to plug in unknowns) which gave x = 31.

Since the numbers were bigger this time, I couldn’t use dcode’s calculator. Instead, I turned to my old friend Wolfram Alpha, which gave me x = 548653309

Back to our old friend dcode and their great calculator for solving unknowns - which gave x = 39.

Referencing this list of prime numbers from 1 to 1500, if we count how many there are we get 43.

the base64-encoded string below corresponds to XOR-encrypted text, with key length of 1 byte. What is the integer in the message?

Using Cyberchef, we can use “From base64”, and then “XOR bruteforce”. Since we know it’s only 1 byte, it won’t be super computationally heavy.

Our key ends up being 49, and the message is:

This one was kinda fun because I actually found two calculators that were capable of factoring this number, but one of them was several times faster (seriously, one was running for around an hour).

I’ve managed to steal some secrets from their subconscious, can you figure out anything from this?

We’re given a file called ciphertext.txt, which contains N, p, e, and c - which tells us this is likely an RSA problem.

Step 1: Determine an N that is the product of two primes, p and q.

Since we are already given N and one of its factors p, we just need to find the other factor by doing N / p.

Multiplying p-1 and q-1 together we get:

Since we are given e, the public exponent, we don’t have to pick one. Instead, we can move to step 4.

We can use a modular multiplicative inverse calculator for this, which gives:

Now that we have all the elements of RSA set up, we can work on decrypting the given ciphertext c.

Using a modular exponentiation calculator, we get:

They’ve gotten into your mind, but haven’t managed to dive that deep yet. Root them out before it becomes an issue.

Inside this file, we are only given n, c, and e, again pointing to RSA.

Using a cube root calculator, we get:

Would you still have broken it if I hadn’t said anything?

We are given a binary executable and a C file as well. Looking inside our given C file:

It looks like we have a buffer overflow-type situation. We want to overflow the buffer[] array, which is 16 bytes long, and then we also want to call the win() function, which will help us get a shell (by running execve('/bin/sh')).

After some trial and error, I discovered that I could get the executable to hang when I entered in 24 bytes. So, I used pwntools to write my exploit, having learned from Down Under CTF:

Which actually worked! I got a shell, and was able to then print out the flag by running cat flag.txt. I’m so glad I learned about this from DUCTF - here’s a screenshot of my victory:

This company is one of the top software companies in the world, because every single employee knows that they are part of a whole. Thus, if an employee has a problem, the company has a problem.

For this challenge, we were only given a binary executable. After some experimentation with it, I found that I could get to a shell by entering in 105 characters. So I used a similar script to the previous challenge, but substituting in 105 instead of 24:

And once again, once we get an interactive shell, we can simply run ls and then cat flag.txt to get the flag.

Navigating to the site given, we see a grid of futuristic looking pictures that link to different pages, along with a Welcome panel at the top that states what my current browser is. If we dig through the source code, we can see that one picture from the grid is missing, and it leads to a page /program.

If we navigate to this page, we’re told that users are not allowed here:

Well, that’s fine. If I’m not allowed as a user, I’ll just pretend to be a program.

Using the Chrome Inspector (Ctrl+Shift+I), we can change our “user agent” to “Program” by:

Refreshing the page will show us this new text:

Unfortunately, this is where I hit a dead end. I tried resetting my user-agent to logical and variations of logical_program, or navigating to /register, all to no avail.

Post-CTF: This is the only challenge I didn’t solve that I left in my writeup. Turns out what I needed to do was navigate to /robots.txt, where I would’ve found:

Turns out I needed to set my user-agent to Master Control Program 0000 for /program/control, where I would’ve found the flag.

It’s time to enter the Grid. Figure out a way to pop an alert() to get your flag.

Navigating to the given site, we’re given a single input box. Once you press Enter, it’ll pretty much echo what you type in.

Naturally the first thing I tried once I realised that was:

Which didn’t actually set off an alert, but it also didn’t print anything - which is also good news. I looked on the OWASP page about cross-site scripting (XSS) for other ways to set off an alert, and decided on trying to use an attribute like onmouseover:

Which actually worked! Once I exited the alert by pressing the alert, the flag popped up:

It’s your first day working at ENCOM, but they’re asking you to figure things out yourself. What an onboarding process… take a look around and see what you can find.

If we go on the site provided, it’s called and look around in the inspector, we can follow a trail of breadcrumbs to assemble the flag:

I actually didn’t know where to find the last one, but looking back at the challenge name (and the site itself, really), it was easily guessable as NC0M} to finish off the flag.

Post-CTF: Turns out the last part was a key in local storage (Application > Storage > Local Storage).

I had a really good time with b01lers - it felt like a safe place for me to kind of experiment with techniques I’d heard of/seen before but never really had a chance to try out (like stegsolve, RSA, pwntools). I might’ve preferred flavourtext that was a little bit more fun, but I think on the learning side I learned a lot.